August Los Angeles home sales activity took another considerable dip, with activity down by 13 percent on an annual basis. With the large August decline, home sales year to date are now 9 percent below the same period in 2017 and 5 percent below 2016 activity. While sales were generally lower across most neighborhoods, the Eastside, Sunset East, and the Hollywood Hills fared better than last August. The decline was again driven by large drops across the Valley, greater Pasadena, and Beverly Hills together with West of 405.

In August, fewer homes sold in all price ranges below $3 million, while sales of homes priced at $3 million-plus increased by 17 percent, after two previous months of year-over-year declines. The increase was driven by higher-end sales in the Southbay, Mid-City, and the Hollywood Hills.

Figure 1 shows Los Angeles home sales activity by price range since January 2016. Note that other than the lowest-priced sales, those below $1 million (yellow line), which averaged 17 percent below last year, higher-priced sales are still relatively similar to the year before and higher than 2016 activity. 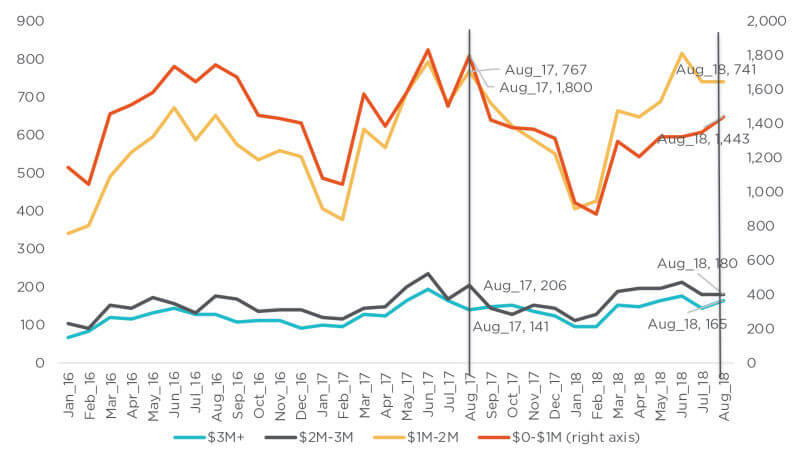 Figure 2 summarizes year-over-year changes in sales in August by Los Angeles community and price range. Note that sales priced between $1 million and $2 million still showed some strength across Los Angeles neighborhoods despite the total decline, which is again driven by Beverly Hills, greater Brentwood areas, greater Pasadena, and the Southbay. Note that the Southbay, however, had a jump in the highest-priced sales.

Overall, August’s large sales decline was most notable for homes priced below $1 million and in the valley, followed by most other communities. 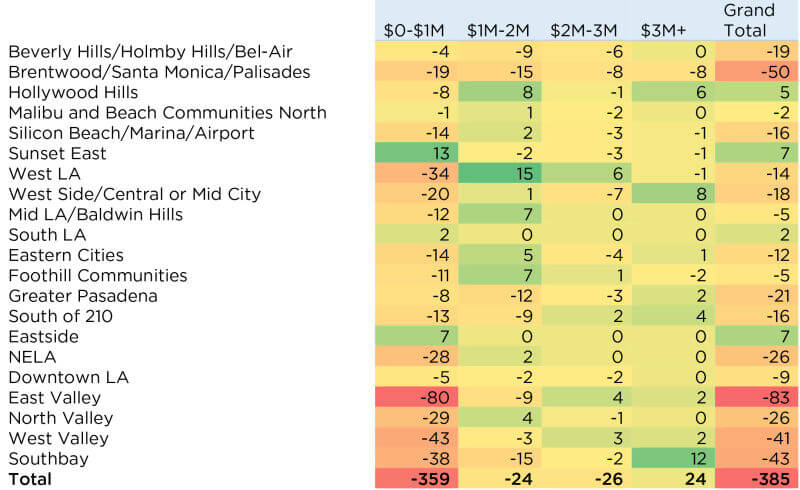 Inventory challenges persisted in August and perhaps worsened. Inventory declined by 11 percent from last August, a larger decrease than in the previous four months. The average decline in 2018 is now 9 percent. Figure 3 illustrates year-over-year supply changes since 2016. Except for a short period of annual improvements in inventory in 2016 (when the line increased over the 0 percent mark), supply has been on a losing streak since the beginning of 2017. 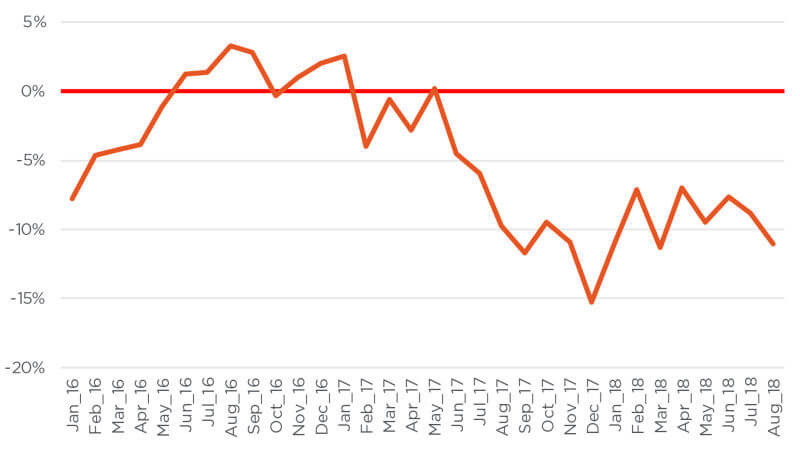 Fewer options for buyers is a uniform trend across neighborhoods. Figure 4 illustrates the three-month average change (June through August) in homes for sale by neighborhood. Only Brentwood and West L.A. showed slight improvements, while all other areas had less inventory on average than last summer.

The average three-month inventory decline again persisted across all price ranges below $ 3 million, while there was a slight increase in the number of homes priced higher than $3 million, notably in the West Valley and Beverly Hills. The supply of homes priced between $1 million and $2 million was down, averaging 2 percent or about 60 homes, though there are areas with some inventory increases, particularly West L.A., NELA, West Side/Central or Mid City, and Eastern Cities.

Figure 4: Change in the number of homes for sale by Los Angeles community, June through August 2018 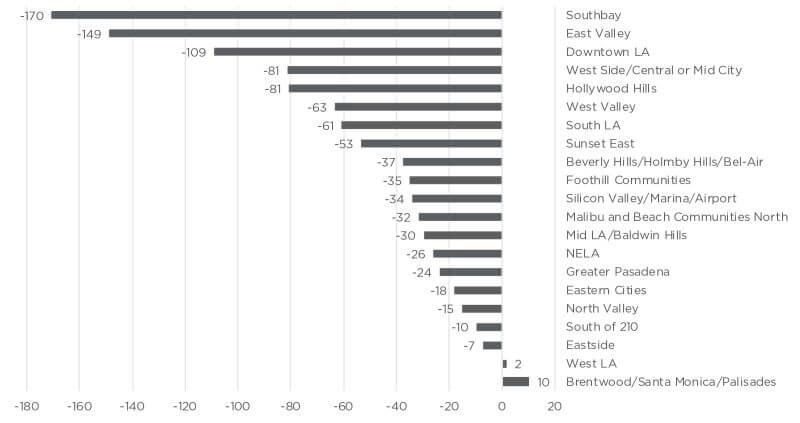 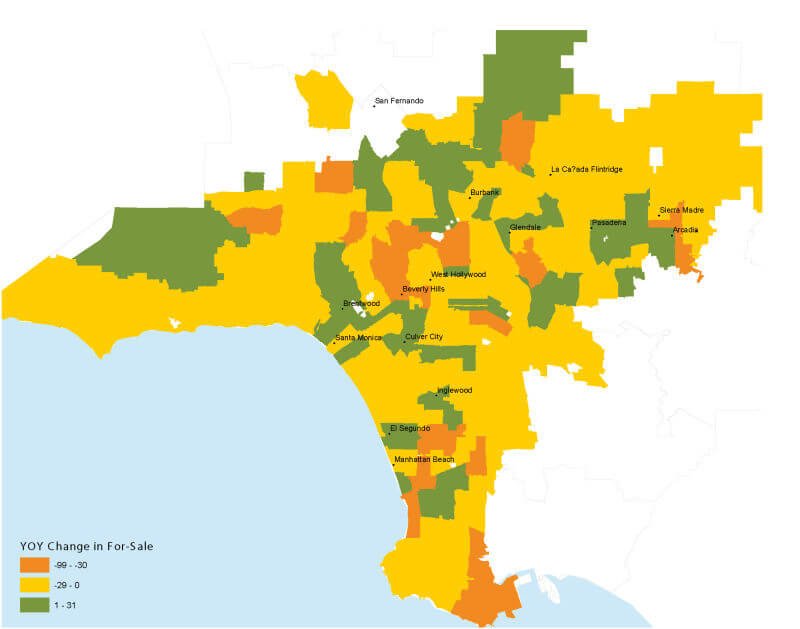 Inventory shortages are still driving appreciation, with the median price up by 7 percent year over year in August, the same rate recorded in July. In August, however, there were some notable median price jumps compared with previous declines, particularly in Beverly Hills, where prices rose by 33 percent. Figure 6 summarizes the average three-month, year-over-year change in median prices. The highest rate of price growth was generally seen in the Eastside, NELA, Downtown, West L.A., West Side/Central or Mid City, and Eastern Cities. 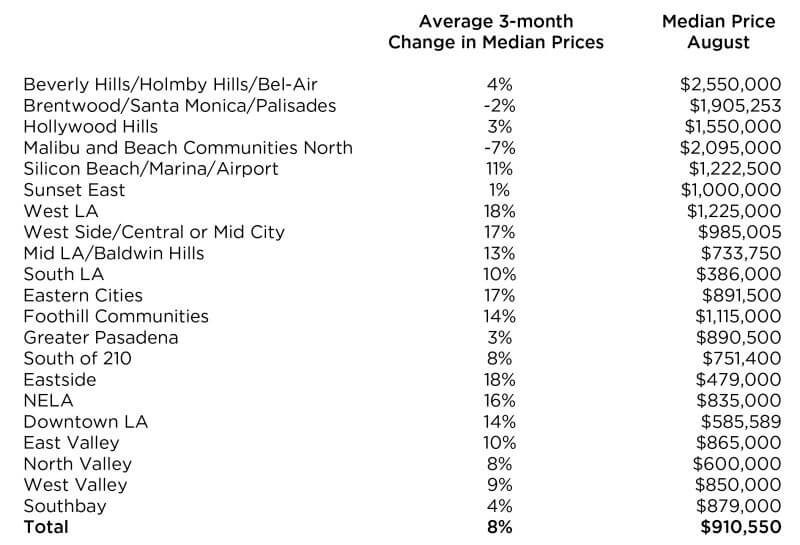 Similar to July’s analysis of Los Angeles housing market activity, buyer sentiment in August did not suggest any notable changes from one year earlier. For example, the overall absorption rate fell by less than 1 percentage point, with the differences fairly consistent across price ranges. Also, price reductions remained overall consistent with last year, with less than a 1 percentage point increase, from 19.8 percent to 20.5 percent. Figure 7 ranks Los Angeles neighborhoods by three-month change from June through August 2017. The second column illustrates the share of homes with price reductions prior to sale by neighborhood. The largest increase in price reductions were in Malibu areas, Silicon Beach, and the West Valley. Overall, changes in price reductions were not entirely consistent with changes in sales activity and cannot be definitively used as an indicator of buyer withdrawal at this point in the housing cycle. For example, while sales dropped in Beverly Hills, there were also fewer price reductions.

Lastly, homes generally sold faster than they did at the same time last year, particularly those priced above $3 million, which generally sold in 54 days, down from 65 days last August. But homes priced between $2 million and $3 million stayed on the market longer, 50 days overall, up from 42 days last August. Lower-priced homes sold faster than they did last year.

Bidding wars, or the share of homes that sold for more than asking price, also remained generally on par with last year. Some areas that started the year with more buyer competition are now showing signs of slowing. In particular, Sunset East, South L.A., Foothill Communities, the West Valley, and Silicon Beach have seen at least a 10-percentage point drop in the share of homes that sold for premiums. 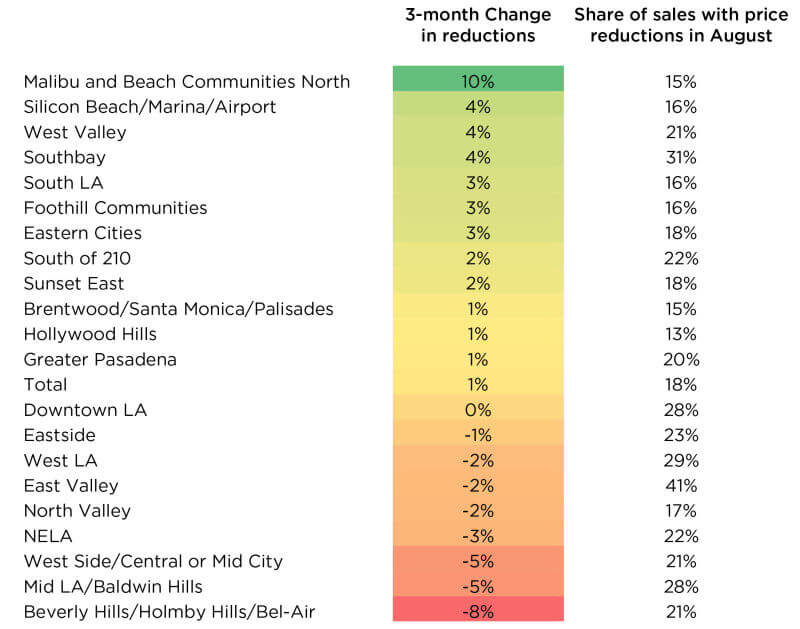 Taken together, the analysis suggests a market that is finding a balance following a frenzied first half of the year, when prices were growing at double-digit-percent rates without much inventory. While significant drops in sales activity may be cause for concern, shrinking inventory levels are in large part to blame and are even more worrisome. Buyers remain steadily optimistic and still not ready to fully throw in the towel. However, the anticipation of higher mortgage rates may limit future sales activity in some budget-friendly areas. On the other hand, buyers in higher-priced neighborhoods may take a little more time and carefully consider their options.